Exploring the Back Roads of Spain: my BMW K75RT and Pedro's BMW R100RR. And an aperitivo. And lunch, of course.


Last Monday the streak of perfect spring weather began. Monday promised to be 24ºC (about 75ºF), sunny, no wind. Perfect in every way. Since I had finished all the translation work I had on Friday and there was nothing left pending for Monday, and seeing as how Pedro was still in town, I just had to take the day off and go for a ride.

Curiously enough, there are large areas of Spain Pedro's never ridden, despite his being from Maranchón and these places within a day's ride of Madrid. But as he pointed out on this ride, the back roads now are in superb condition, no traffic, clean wide shoulders, excellent asphalt (generally) but back when he was riding around in the mid 1970s these roads were torture. We decided that this was something tangible Spanish citizens got out of joining the EU back in 1986, and that much of the EU structural funds in the FEDER program was well spent. Summer in Portugal last August showed Javi and me that although the money got spent, not all countries produced the goods.

Another friend Paco was the first to take me down a few of the roads south of Toledo, in the wilderness  and vast emptiness of a region called la Siberia extremeña for good reason. So that seemed like a good choice for the day.

In any case, the first stop was for gas. At 1.40€ a liter, Pedro says it's gone down a bit since his last visit home (last year), but I'm skeptical. 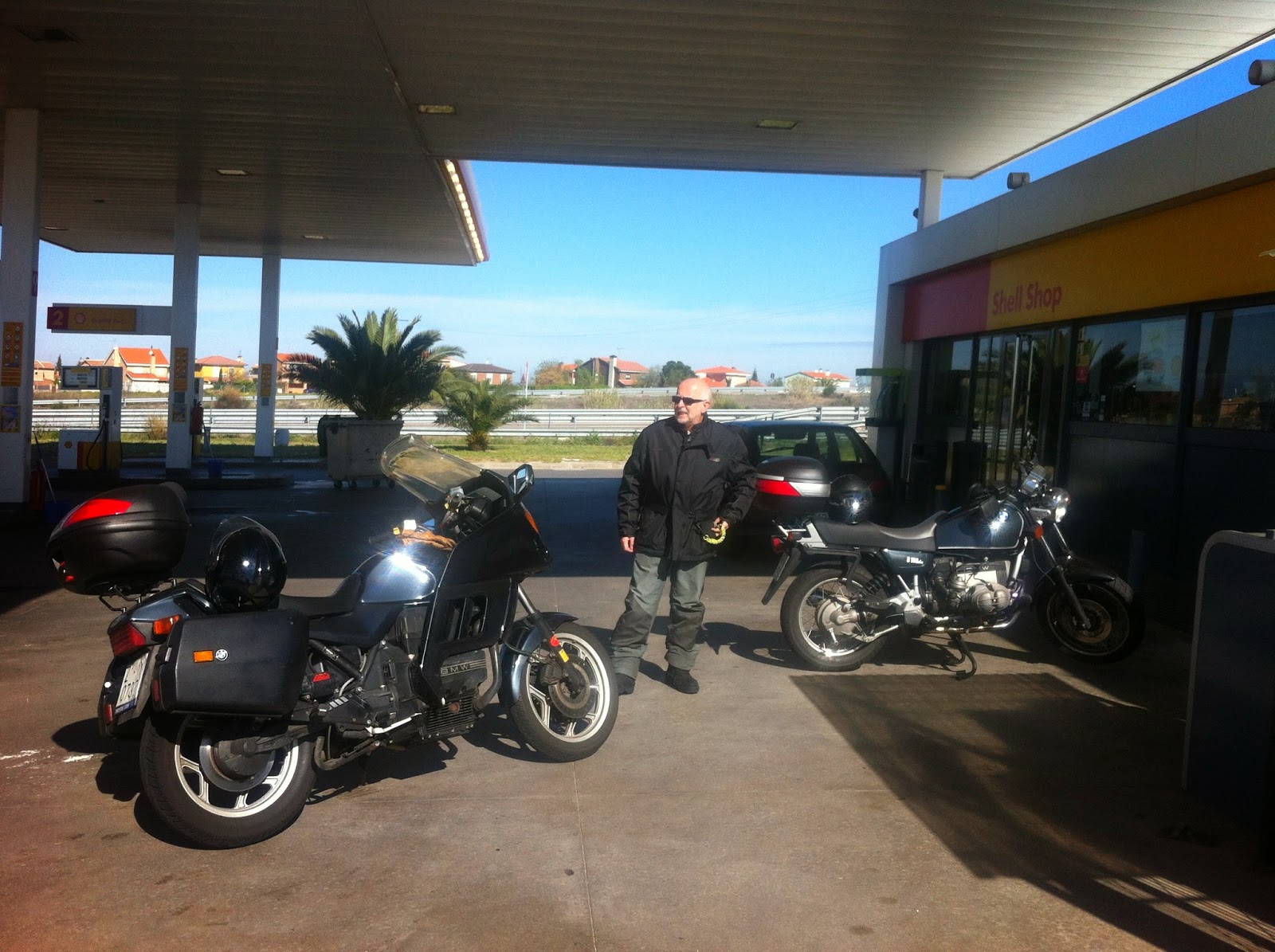 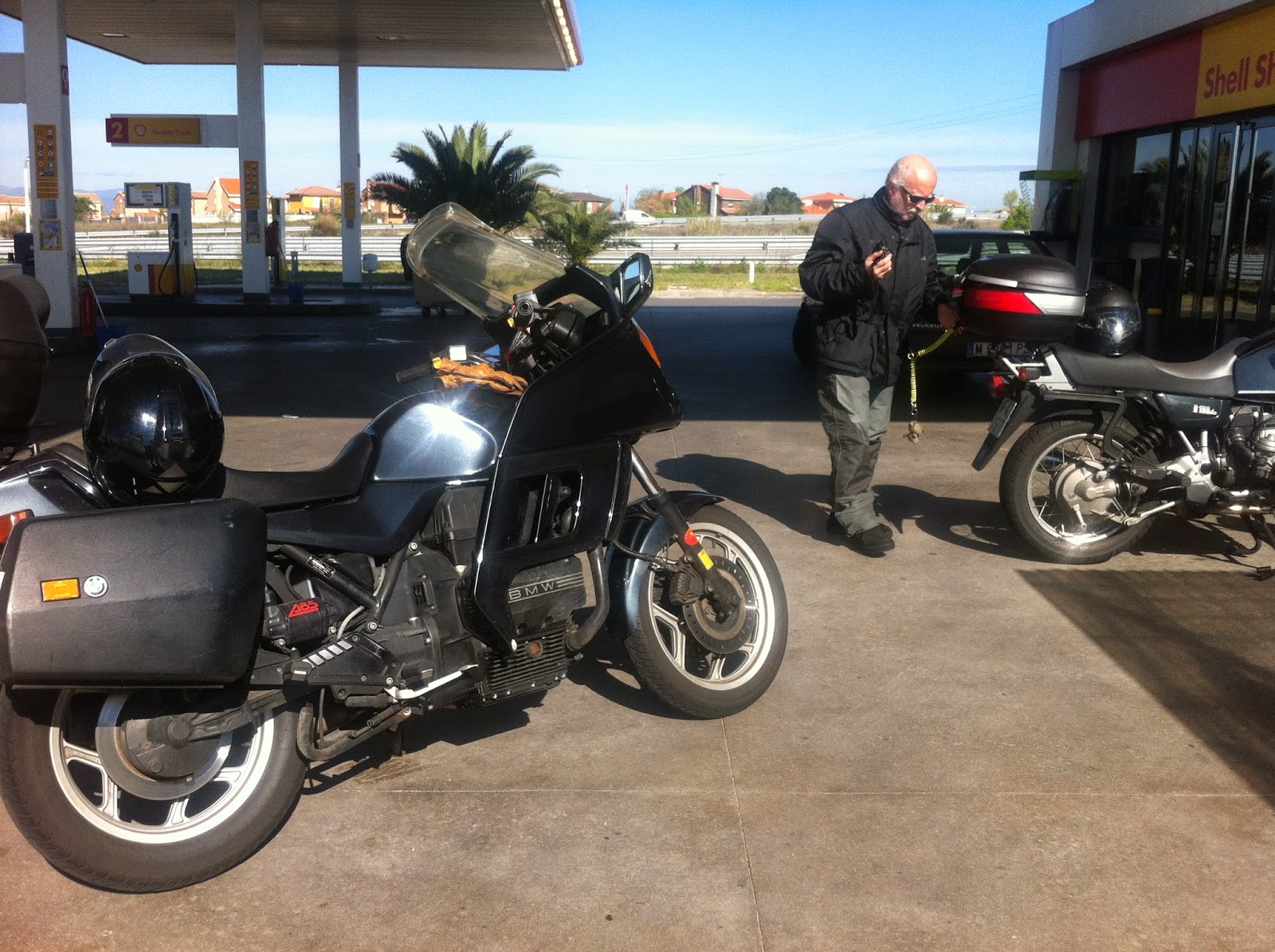 A selfie on the fly: 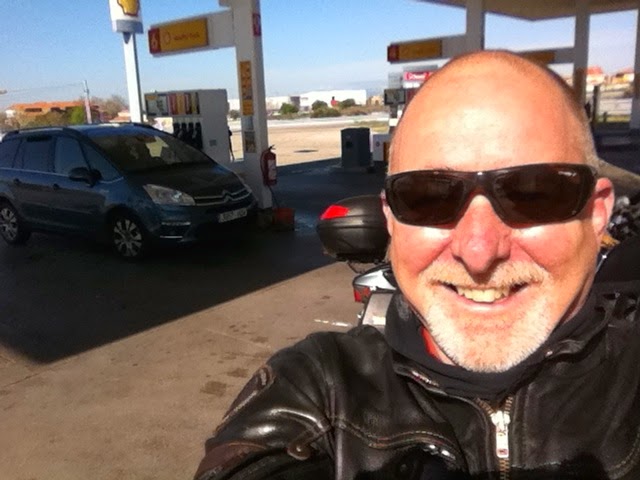 Next stop: exit the highway and get onto the fun roads. A stop on the Tajo River at Malpica del Tajo, on the bridge beside the Castillo de Malpica, still owned by the Marqués de Malpica and Duque de Arión. Nice cozy abode, I'd say. 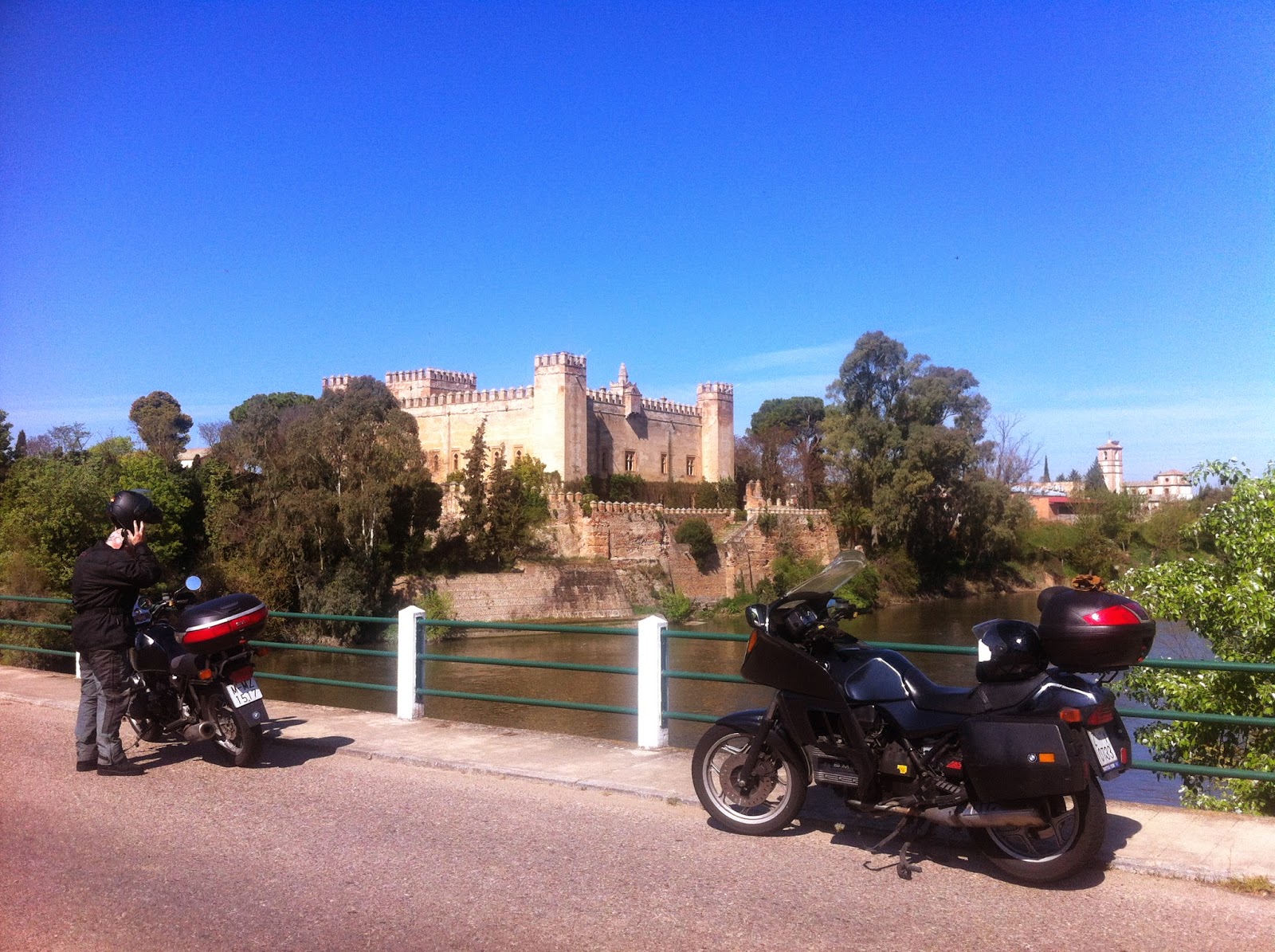 Another 30 minutes of driving some gorgeous roads. Pedro pulled out his special solar-powered GPS for a quick look, since he had no idea where we were. I used my X-ray vision to determine our precise location: San Bartolomé de las Abiertas.

Next thing we knew,  it was time for an aperitivo. This little town had a very pleasant square for a vermouth. 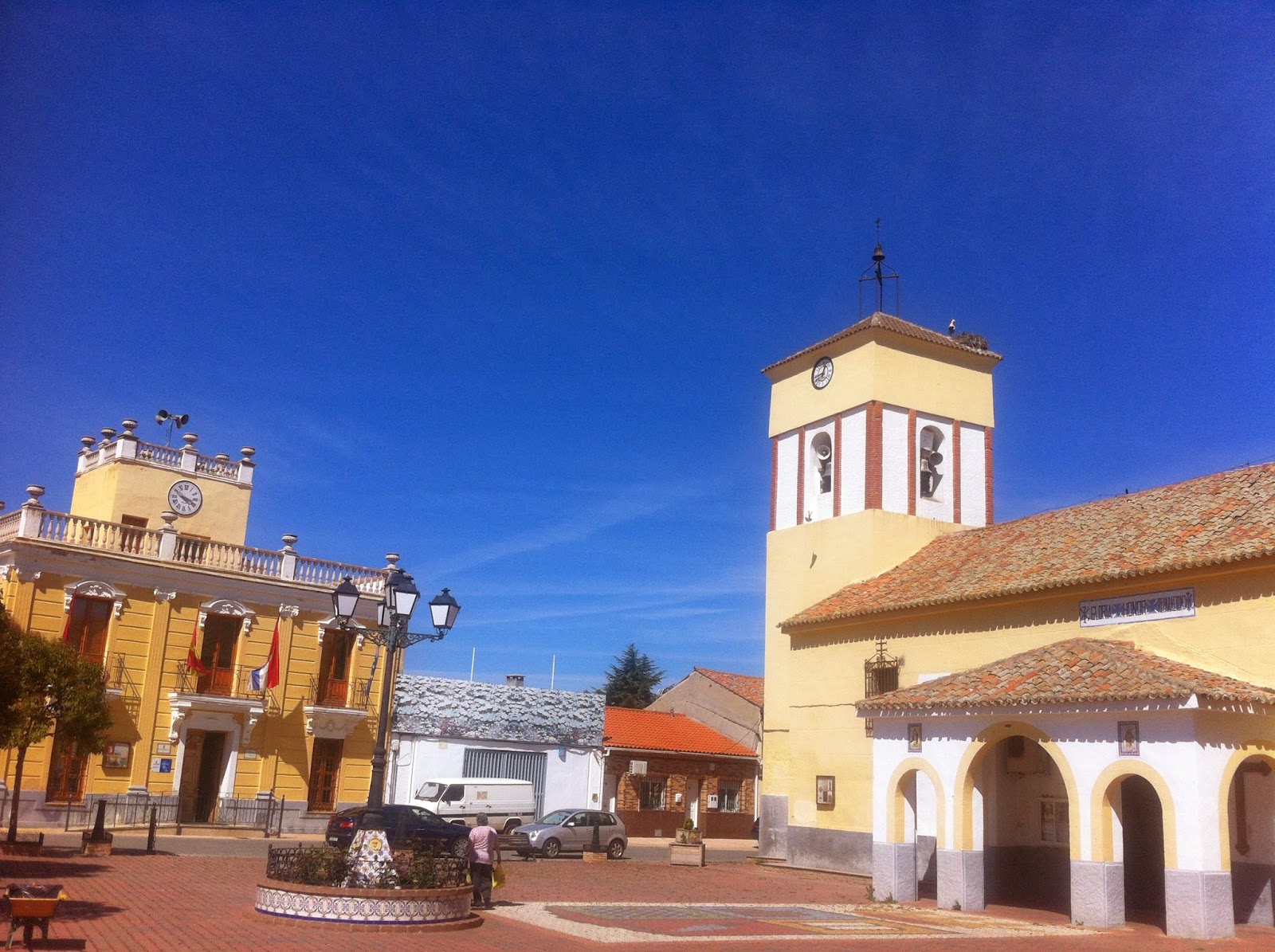 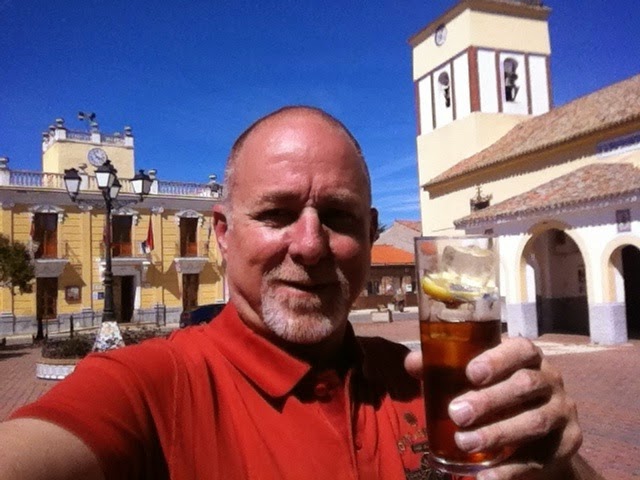 Our aperitivo only made us hungrier, so our next stop was at the first roadside place we could find that looked good.
This "Mesón El Labrador" advertised all over the countryside, proclaiming charcoal grilled meats, specialty of the house was a huge sirloin steak 2 inches thick. Yes, sir!

But not quite. There was no grill, in the end, since they don't light it during the weekdays. There was no table service outside, so we had to set the table ourselves and then clear it. A basic plato combinado (10€) was tasty but not the juicy steak I had in mind. The sliced fresh tomato was fabulous: sweet and flavorful. 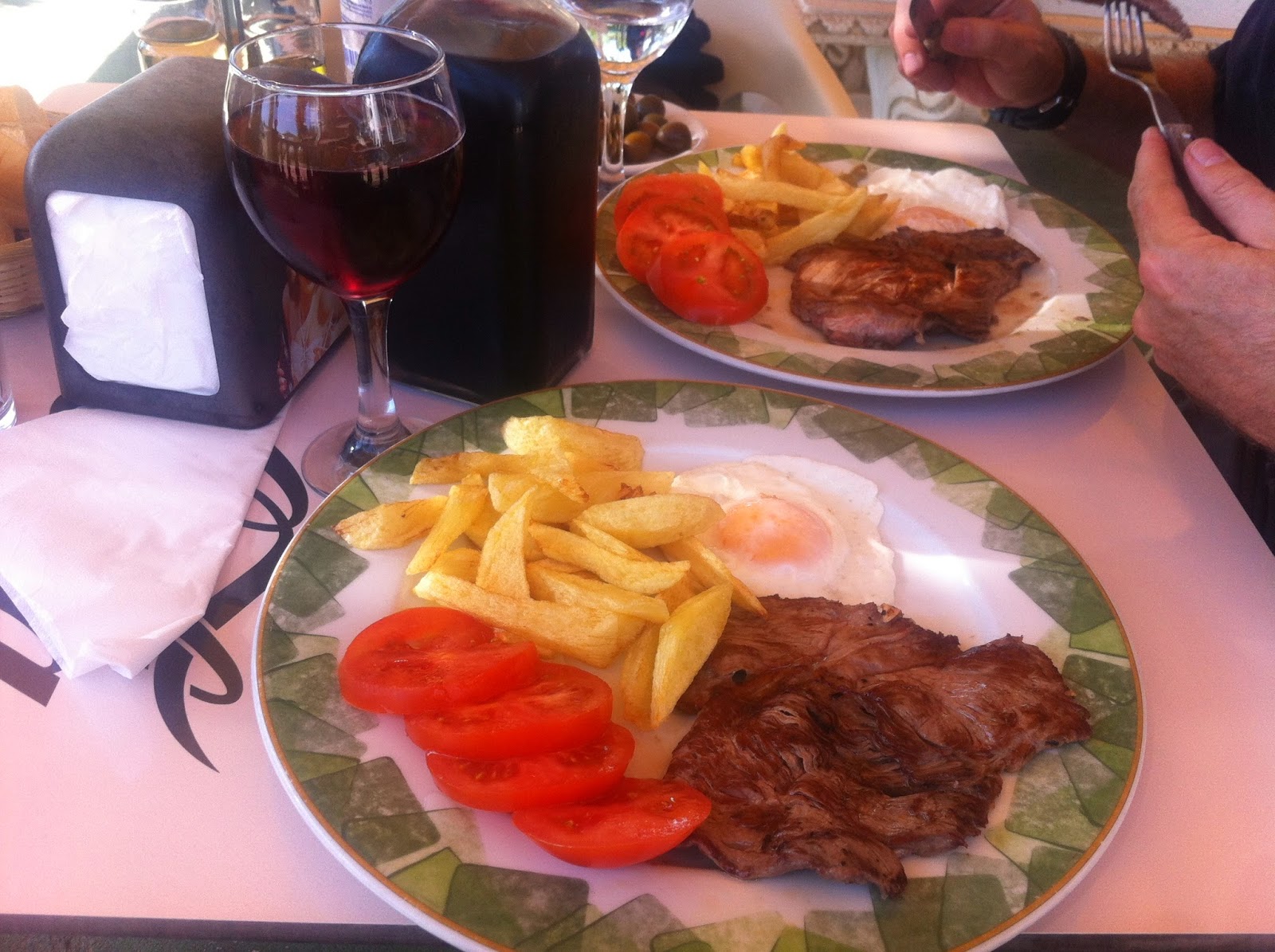 The road beckoned even though we were comfortably chatting about the sorry state of the world (Brazil in particular, which is where Pedro's been living for the last 6 years) and catching up. The road down to Herrera del Duque is a national highway in excellent shape, very little traffic. It passes by and over some of the reservoirs built along the Tajo River as it heads to Portugal and eventually empties out into the Atlantic Ocean in Lisbon, giving the Portuguese capital an amazing and gorgeous miles-wide waterfront. Here it is at the Cíjara Reservoir. 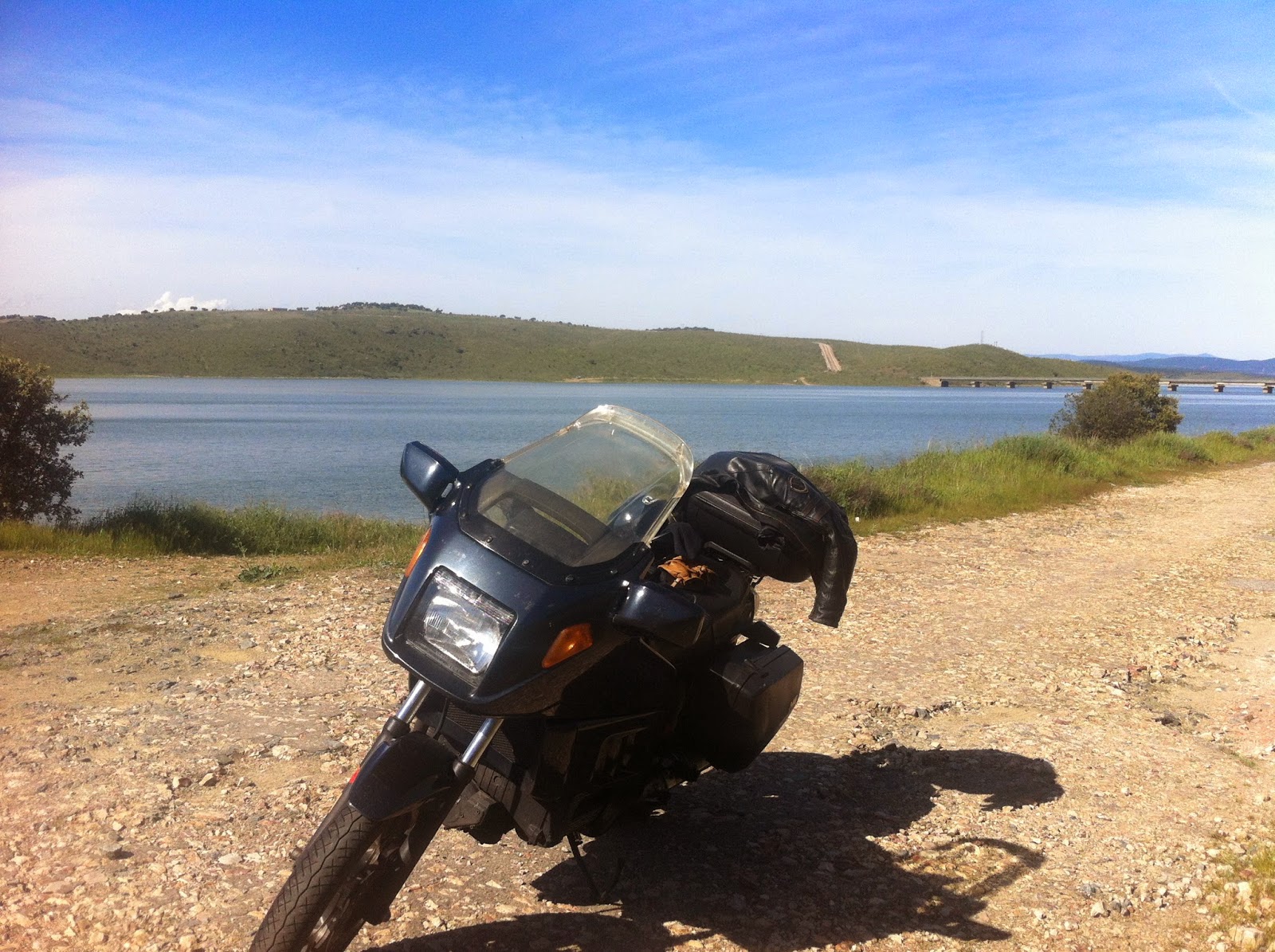 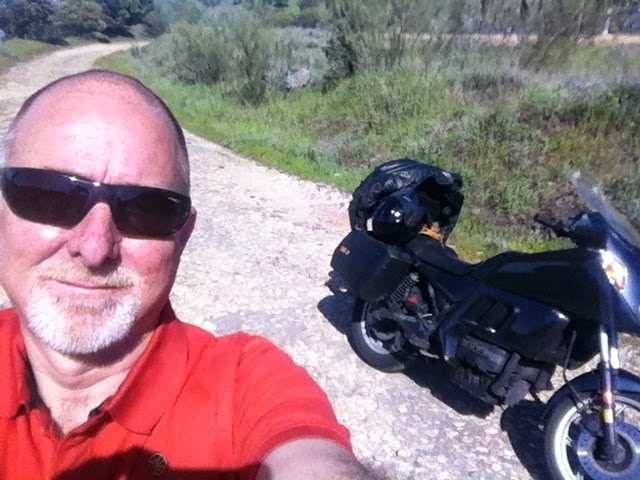 The rest of the trip was amazing but I have no more photos. The little mountain forest path we rode up to Villarta de los Montes and on to Horcajo de los Montes is AMAZING. The pine forests give way to live oak forests and then onto normal oak forests. Miles and miles of rolling hills, not a person, house or village. We saw a car. One. This road was a single narrow lane, unmarked, the pavement in poor shape with lots of gravel, so we made our way slowly to Horcajo. Once past there, the road turns fine and we rode through the National Park of Cabañeras, beautiful and fun to ride, with nice curves and safe asphalt, gorgeous landscape. Anyone riding to central Spain needs to try this route.
After the park, on the north side, there's a stretch of 8  km of absolute straight-as-an-arrow-come-hell-or-high-water road (reminds me of the Roman road through Gloucestershire in the UK) that suddenly turns left and leads up a low mountain pass, now with fabulous curves and breathtaking vistas of the hidden green valleys of the Montes de Toledo.
Then up through the posh villages for rich hunters, and onto the main autovía from Toledo to Madrid. We rode past Toledo just as the sun was setting. That will require a trip all its own, for a letter date.