The Río Cuervo (Spain) on my Royal Enfield Electra

My biker bud Javivi had been wanting to take a ride up the mountains between Cuenca  and Teruel to see the source of the River Cuervo. I hadn't ever heard of the river let alone its source, but people were telling me it was a magical spot in the middle of gorgeous roads for motorbiking.
We got an early start (8:00am) to beat the heat (38ºC/102ºF) and get to the upper altitudes where it was cooler and nice and green.

My three companion riders: Javivi on his BMW 650, Jose Luis on his new Gladius, and Miguel on his V-Strom, so we were an odd mix of bikes. But in the end it's more about brains than bikes and even Miguel had fun taking like easier at a slower pace.

We had our second breakfast in a bar in a town in the mountains past Cuenca. Grilled pork loin and cheese sub sandwiches that were awsome! 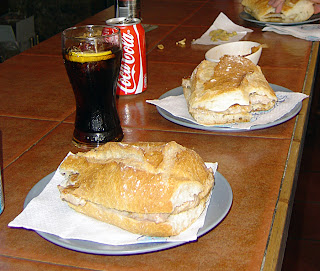 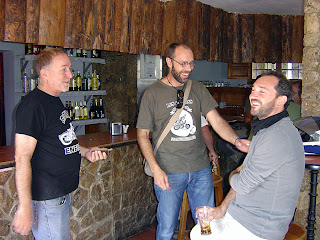 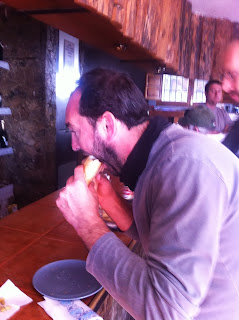 And then a ride up through amazing karst formations and canyons and pine forests and scrub oaks, to a lookout point at a reservoir: 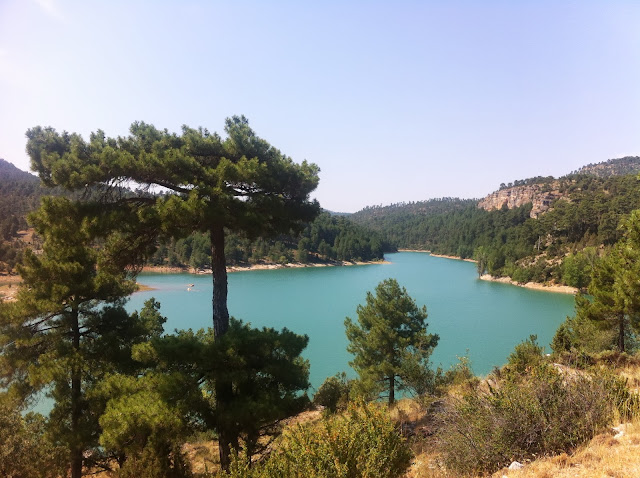 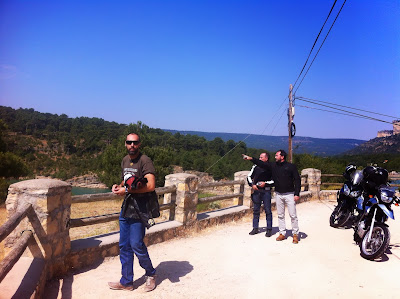 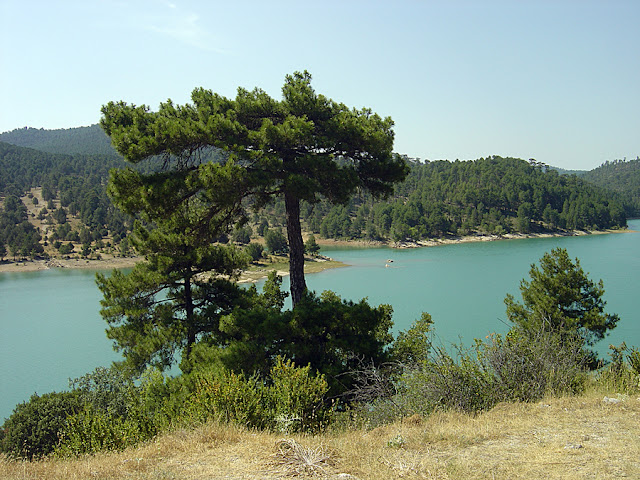 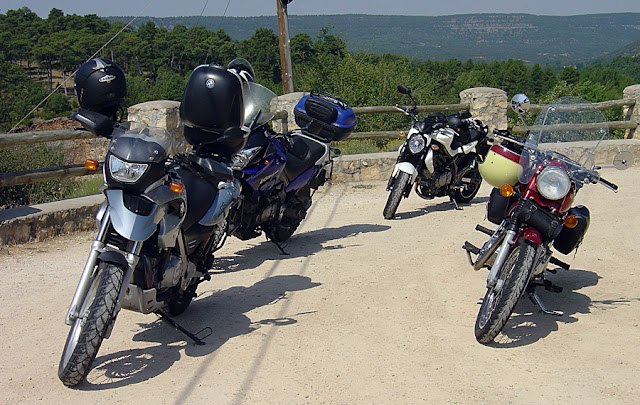 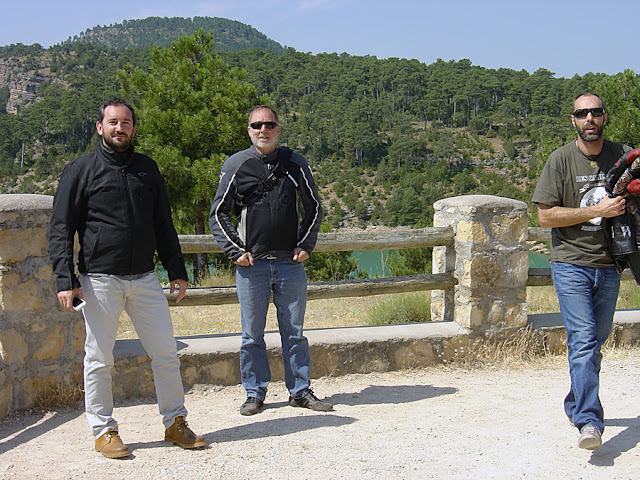 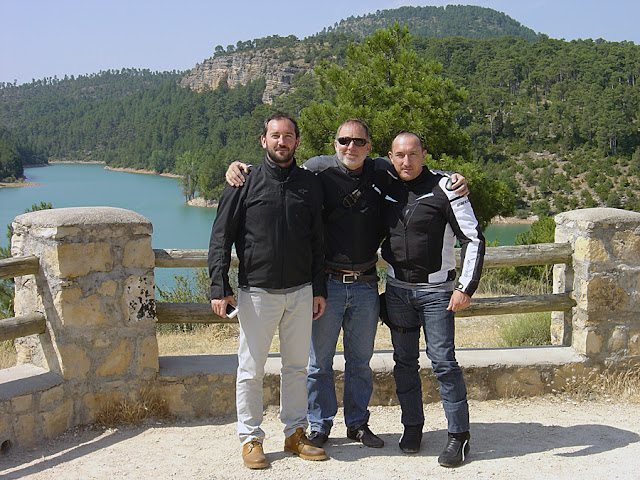 Then a bit further on to the source of the Crow River (Río Cuervo), where you park and walk a bit into the forest to find the pools of water and the cascades amid the bright green moss: 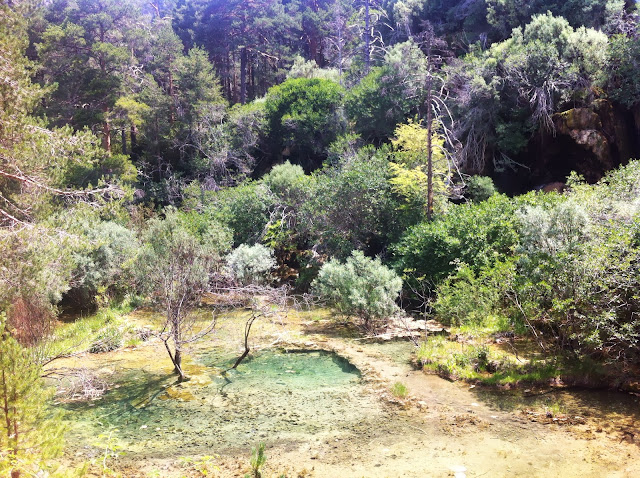 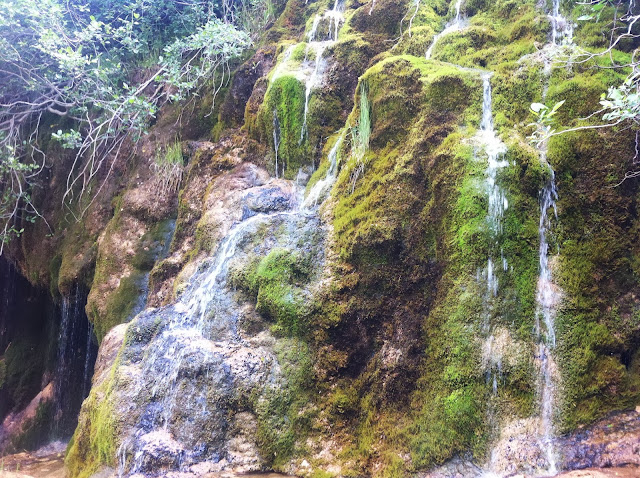 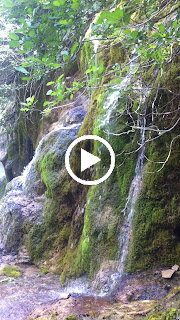 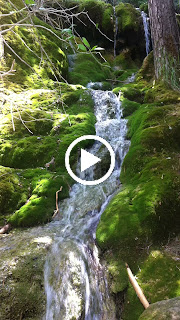 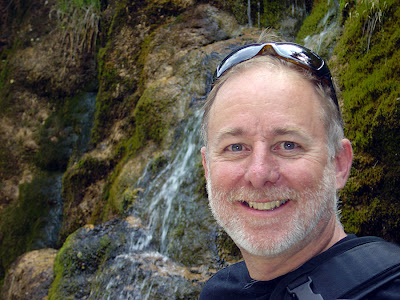 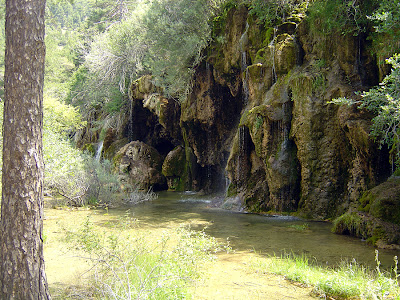 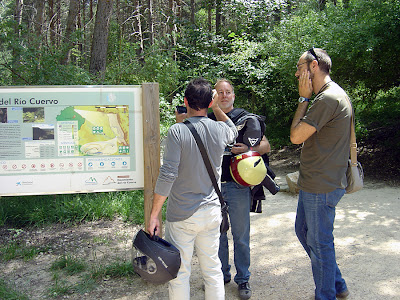 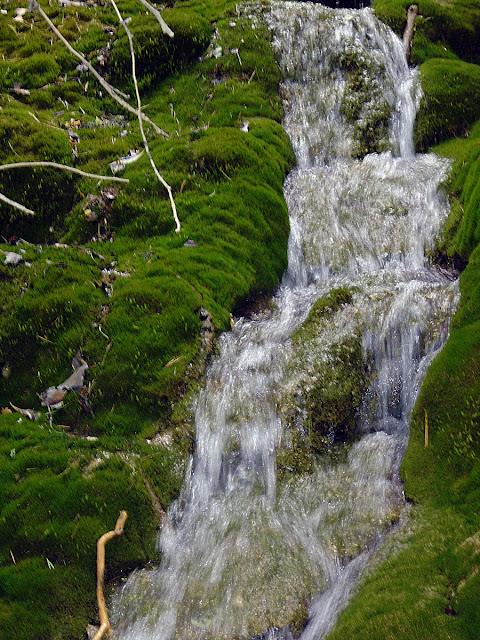 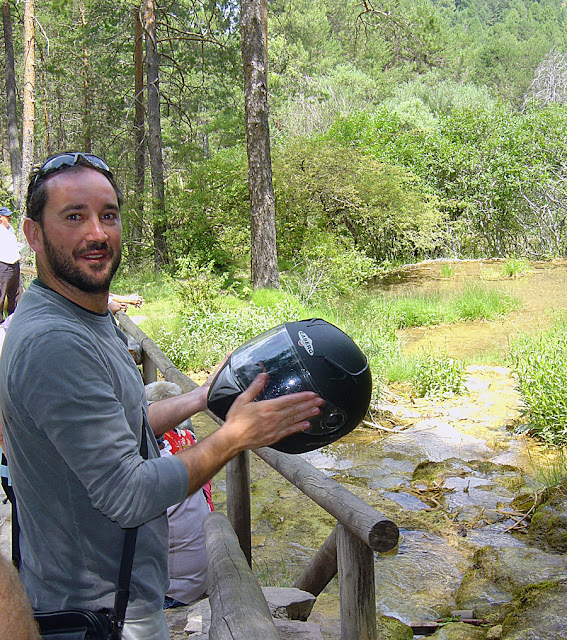 All that nature deserves a beer. so we drove off to the town of Tragacete for gas (and muffins) and then to Beteta for a botellín. 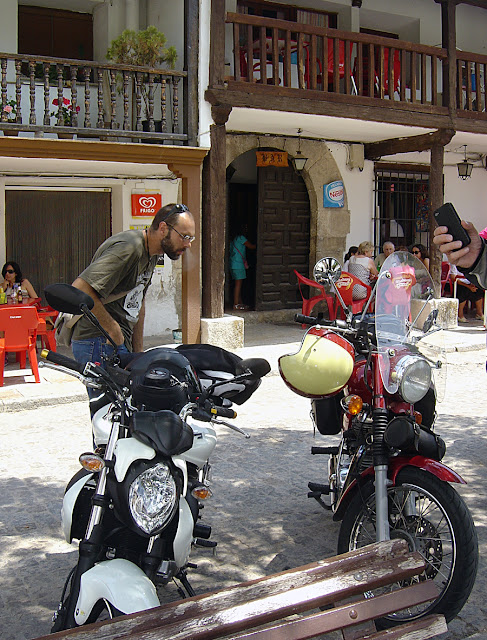 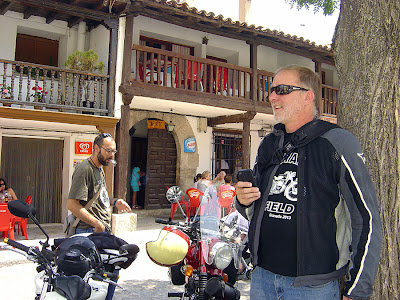 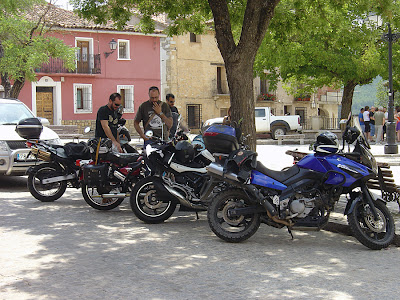 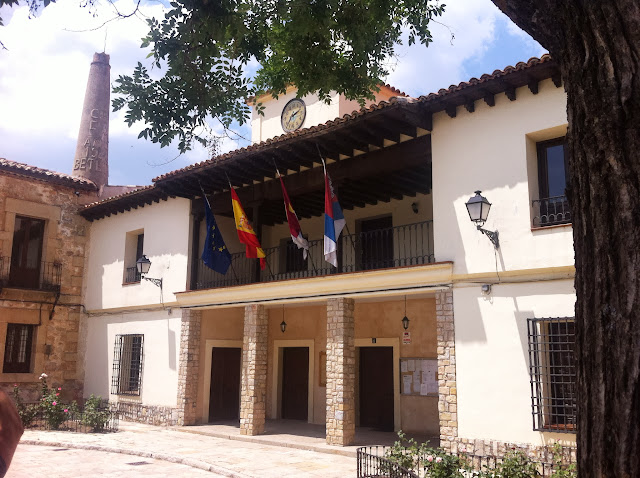 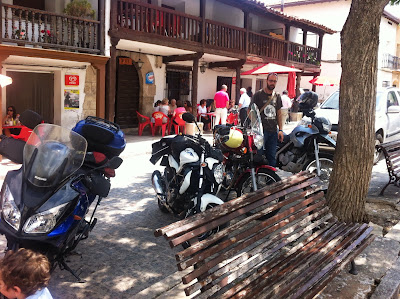 The views from a lookout point in Beteta. Are those some clouds over there? 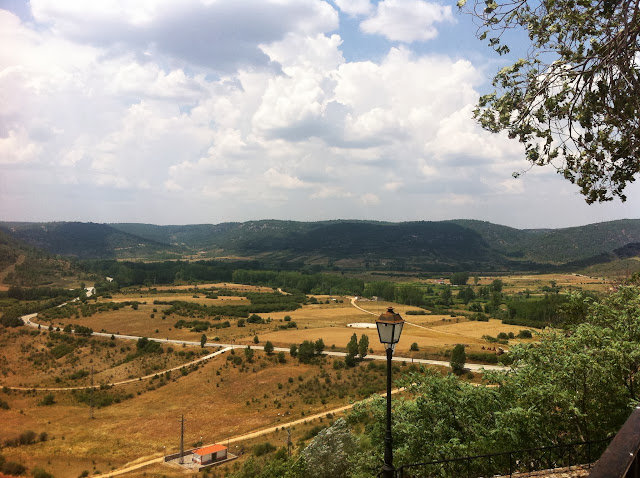 Sure enough, the clouds rolled in and after lunch it started to rain. By the time we got to Alcocer it was pouring and lighting was striking all over. We stopped for refuge under the porch of an old abandoned (and locked) chapel and waited for the storm to pass. 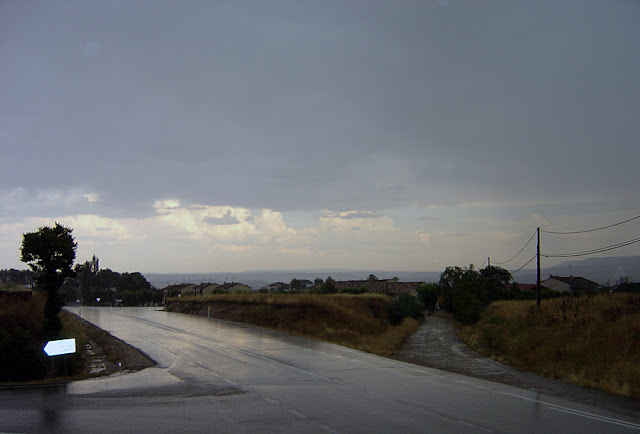 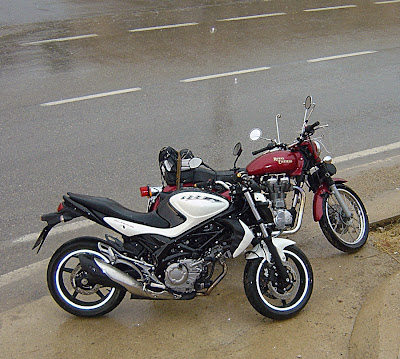 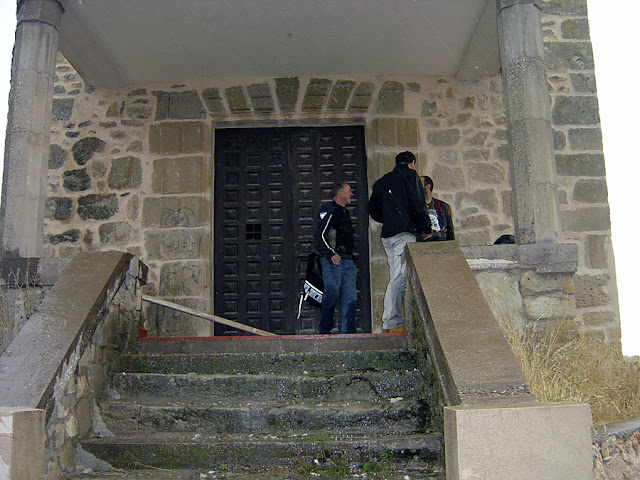 The storm did not really pass; it slowed a moment and we rode off into the rain, which continued until we got near Madrid to say our goodbyes and promise to ride together again soon.
Jose Luis and I rode back to our respective neighborhoods in Madrid and parted ways at the M30 ring road just as the hailstorm hit and soaked me to the bone again. Man that hail hurt as it hit my face!
Posted by Jónico at 1:10 PM