A Man, a Motorcycle, and La Mancha

A 4-day weekend of All Saints' Day (Nov 1) was approaching. Javi was going off to see his 93-year-old mom in the Canary Islands.

Leaving me to my own devices. Read: ROAD TRIP!!!
The destination was unclear until the last minute. In the end the only place where the weather was not supposed to be horrendous was on the Mediterranean coast, from Valencia to Murcia.
Drats. What a hardship. OK, twist my arm.
Then Rubi called from the bike shop and said a client was riding his newly-repainted 1994 Royal Enfield from Madrid to Denia to catch a ferry back to Ibiza, and if I wanted to go along for the ride.
Although that plan ultimately fell through (he had to leave on Wednesday, I couldn't get away till Friday because I had to have a blood test taken), I kept the course heading for myself and reserved 2 nights in an inexpensive 2-star hotel on the beach (Hotel Solplaya, 30€ a night including breakfast and taxes).
So Friday morning dawned, I packed my 3 items into the tiny saddlebags and headed to the hospital without breaking my fast.
It looked like Macy's on the day after Thanksgiving.
I had turn number 240, but luckily things moved along quickly and the nurse was pleasant and efficient. By 11:00 am I was happily breakfasting in the hospital cafeteria.
Note the wrapped sandwich and the mayo sachet. They'll crop up again later.

11:30 am. The Balita Roja started up on the 8th kick and off I went. I took the A-3 highway for the first 68 km, exiting at Zarza and Santa Cruz de Zarza. It started to rain just then, but the storm was heading north and I south, so it didn't last long.
Besides, nothing could dampen the relief of no longer being on the boring and aggressive 6-lane superhighway and the joy of being on untraveled back roads in the hilly countryside near the Tajo River. 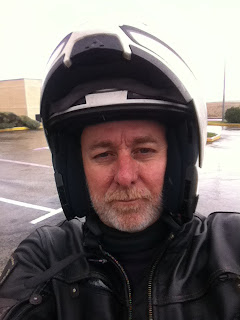 The skies were grey, which was actually better for driving the motorcycle (no glare on the visor). The weather warmed up enough for me to take out the winter lining of my biker jacket and pants. The air was fresh, the rich smells were of tilled earth, pines, a log fire in a country house. I found myself cracking open the visor and breathing long, deep breaths. My Balita was humming along "po-po-po-po" alone on the roads and byways. A noble bike, ready and eager to please.

At Villanueva de Santiago, on the far side of town I whizzed past a cheese factory. Manchego cheese. Hmmm. I wonder if they sell to the public. Quick turn around. 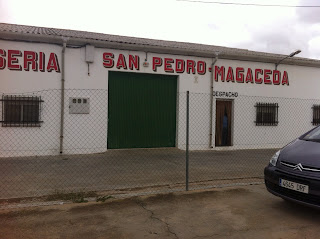 Sure enough. I bought 4 and somehow stuffed them into the saddlebags.

While I was half expecting nobody to answer the door, it opened right away and I was ushered into the "despacho", where I found 8 or 10 people ahead of me buying cheeses of all types and sizes. Well, in truth there were 4 types: fresco, semi-curado, curado, and viejo. Two sizes each: small (1kg) and large (2kg)I expressed my surprise and bewilderment when the little old lady at the front whipped out 280 euros to pay for her cheeses she had her husband haul off in a big bag. The middle aged couple in front of me explained that it was the best queso manchego around, that they live in Alcalá de Henares and drive all the way here every few months to buy their cheese.
Still bewildered, I asked about the difference between the cheeses when it was my turn. The ruddy, smudged-apron cheese maker man then informed me of the curing periods: 1 month, 3 months, 6 months, and 18 months. So I bought two frescos  and two semi-curados so I could give some to Virginia and to Juan when I saw them this weekend in Valencia.

Too bad--the ruddy little man asked me what cheese I like, and when I told he I liked them strong, he scuffled back to the factory and brought out a wheel of viejo manchego and promptly sliced off 4 big slices for me to try. Out of this world. Fantastic and orgasmic.
No more room in the saddlebags. I'll have to go back soon and get some, like the family from Alcalá de Henares.

Next stop was to have a vinito in Belmonte, which I heard had a nifty old castle. It turns out the whole town is gorgeous! 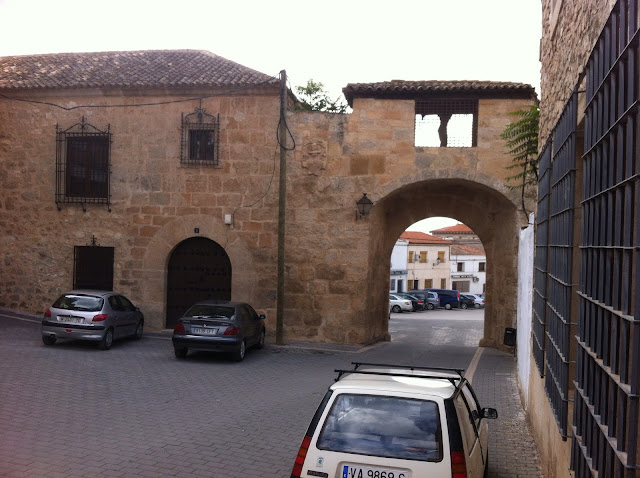 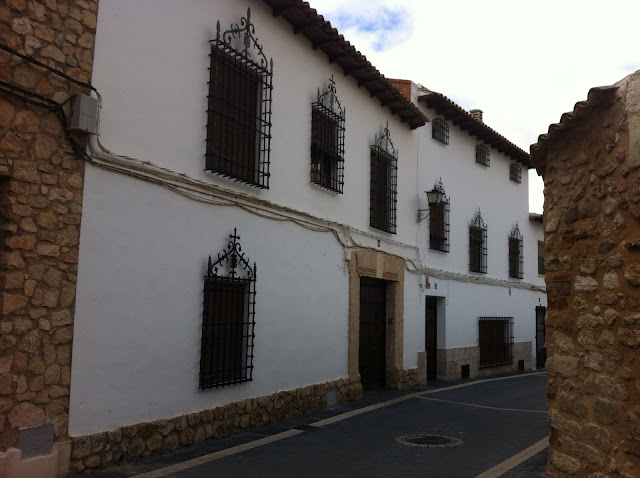 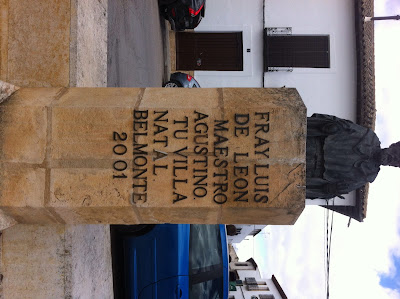 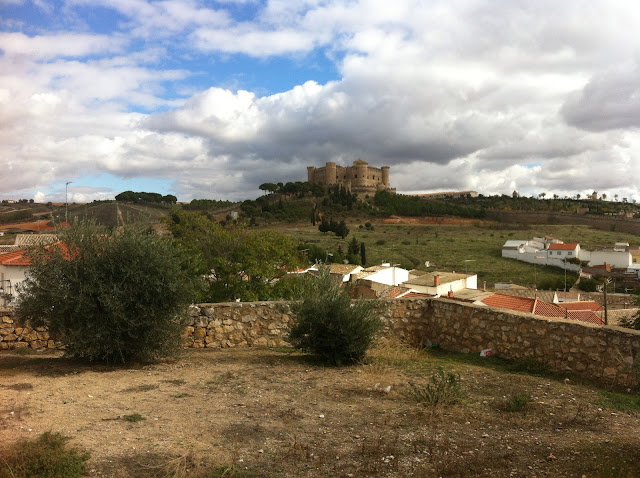 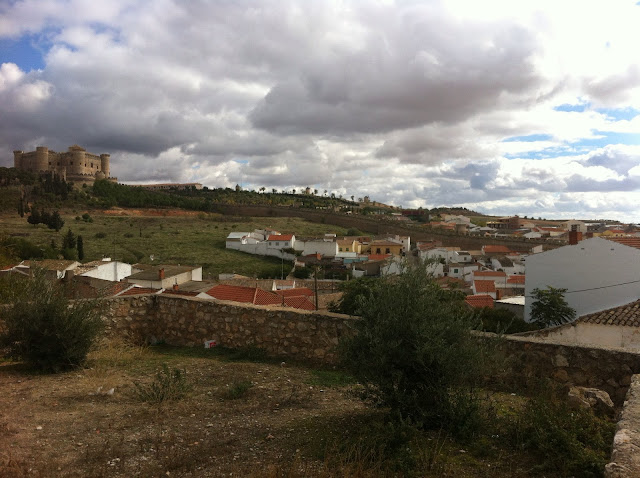 The local red it turns out had a bit of debate. In the bar, I ordered a local red. The bartender shook his head and said they didn't have any, but he could give me a red they did have. "It's not local?" I asked despondently, and he admitted that it wasn't. He then said he did have a white that was local and explained that Belmonte basically did only whites. That is unusual. "So white it is", I said. But the other old farts siting at the bar in their farm boots and blue monos (overalls farmers always wear in Spain) told our man behind the bar to serve me the red despite my protests that I was interested in the local wine, white if need be. But to no avail.
The red was nice, flavorful, not too fruity and not too tanic. Rioja, no. Ribera del Duero, no. Somonte, doubt it. I asked where it was from.He said the name of a town it turns out is  only about 10 km away. By their standards. that made it a wine from foreign parts. Only 10 km but for them it was a different world.

Refreshed
Onward went my journey, to the pretty town of Alberca de Záncara, where I crossed through the quiet plaza, unchanged by the passing centuries.


The roads and landscapes here are amazing. 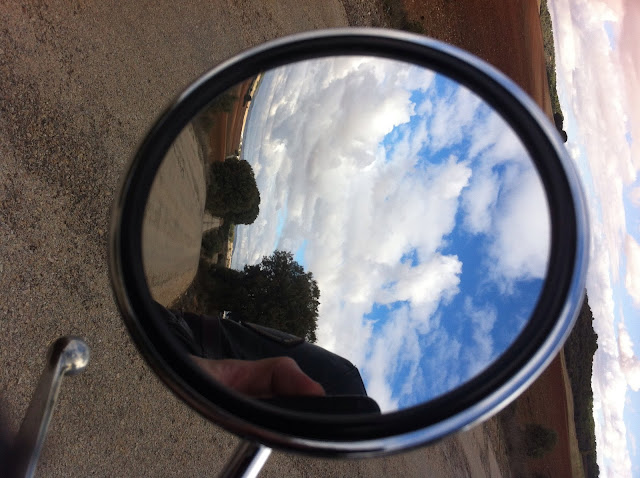 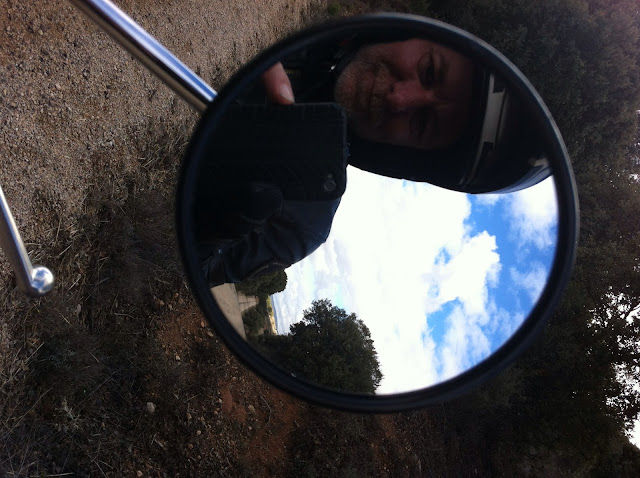 Another 100 km flew by. Time for me to have some lunch. But they day was too fine to go eat in some roadway joint. That's when I remembered my sandwich I kept from breakfast! The Balita Roja also needed fuel, so I filled her up and bought a coke and rode off to find the right place for my impromptu luncheon. No gas station parking lot for me.
Soon I came to the town of Picazo, and found exactly the spot on the banks of the River Júcar.


There was even a litter basket nearby.
The last stretch took me to Casas-Ibáñez and up into the hillside. There was no chance to stop and take pictures--I was way too busy grinning from ear to ear as I leaned the Balita over at 80kph through the hilly curves, hooking them, curve left, curve right, curve left and so on for 25 or 30 kilometers. I have never had so much fun riding. A Must Do This Again treat.

Late afternoon was approaching, the best way into Valencia was to connect back up with the A-3 superhighway from about 45 km out, in Requena, and follow the signs into the port of Valencia and the hotel. I only had to ask once (a guy on a BMW next to me at a stoplight).
The hotel is called Solplaya ('Sunbeach").