On the Town with Emilio Mazarías

Emilio Mazarías is the owner and mechanic of the motorcycle shop (MOTOS MAZARÍAS, calle de San Pedro, 13) in Madrid that sells Royal Enfields. He knows a few things about bikes. He is also a DANGEROUS man to go out for a quick drink with, and if his lovely wife Rubi comes along, it's bound to become a late night indeed.
This is Emilio with Javier Ortíz as we walked back to the bikes after prowling downtown Madrid for authentic tapas in the middle of tourist madness. We drove our Enfield Bullets up into town to the Plaza Mayor (we even tried dropping in on Mario at his store, whose old Enfield is pictured in a previous post, but he was gone for the day).
We had calamares and patatas bravas in one place.
Croquetas de queso y de puerros (cheese croquettes and leek croquettes), in the Mercado de San Miguel. (OUTSTANDING)
Then a "chato" (a small flat glass) of red wine and some cecina (thinly sliced cured beef) at a little dive bar behind the Plaza Mayor (Bodegas Ricla, on the Calle de los Cuchilleros).
Then over to Casa Revuelta for a piece of deep-fried battered salt cod.
Not so hungry but still in full swing, Alfonso Luque led us on into La Latina, where they almost jumped over the counter when he strolled in, and served us all sorts of goodies: a tortilla de patatas con tomate, green olives, baby squid cooked in onion, a platter of fried fish, a plate of Manchego cheese. We had to run out of the place literally before they gave us another dish of food!.
The two gents below decided to o for broke and have a little ice cream. LITTLE? 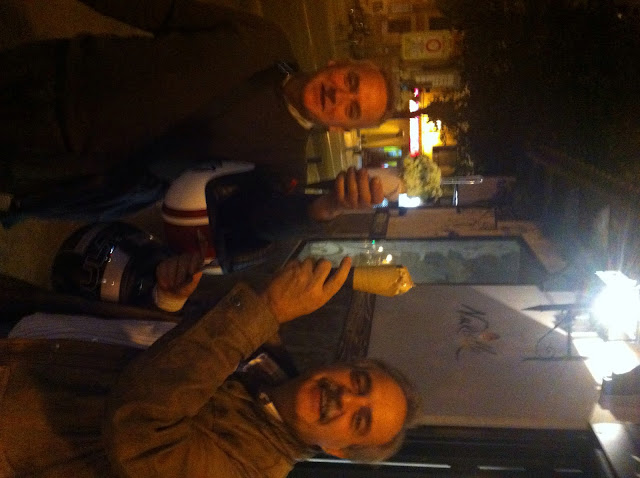 I could hardly walk. But I had my trip to the monastery libraries the next morning, rise and shine at 5:30 am. Uff!
Posted by Jónico at 8:41 PM