A Group Ride with MOTERUS + Lunch 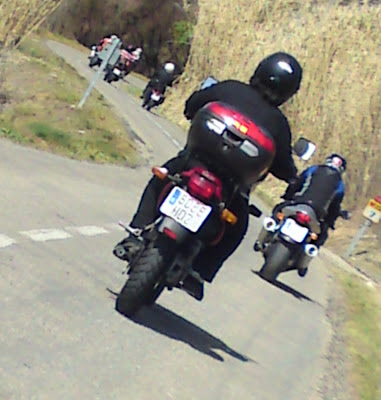 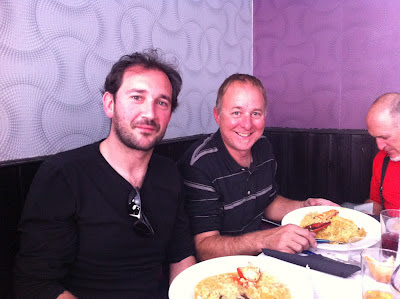 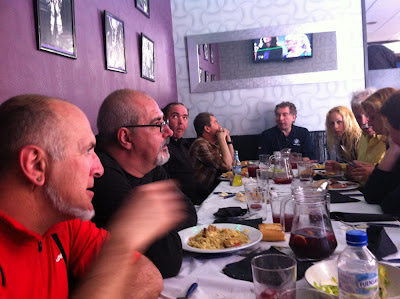 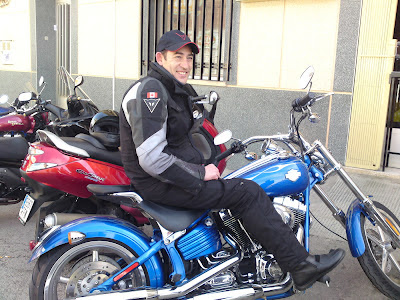 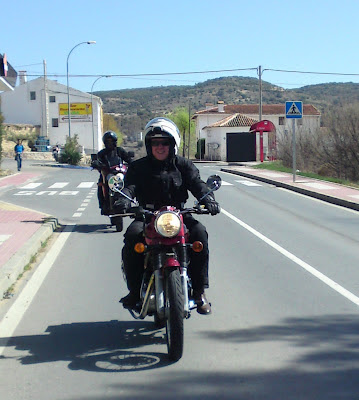 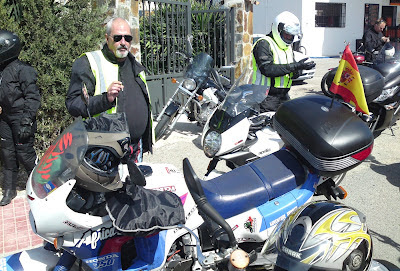 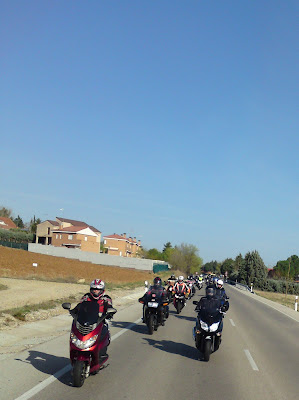 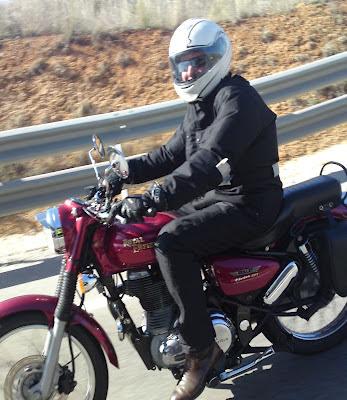 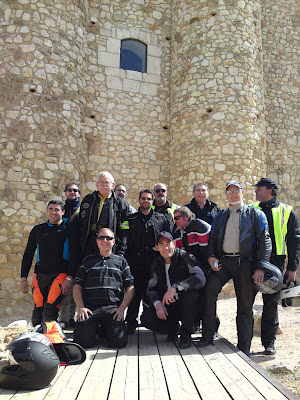 On Sunday I took the Balita Roja out for a spin with about 25 people from some of the moterus.es subgroups. I had ridden around with most of them at some time or another, and met some new people, too. We had a VERY ecclectic group of motorcycles, ranging from Suzukis, Harleys, and African Twin, a 125-cc scooter, a Honda Silverwing, and of course a beautiful Royal Enfield Bullet (hehehe).
The starting point was off in Coslada at the ungodly hour of 8:45 am. We had just changed the clocks to daylight saving time the night before, so we were all lacking one hour of sleep. But still, off we went, from Coslada to Guadalajara, where we stopped for coffee and "porras" and then down to Orusco and Villarejo for a cañita, then back up along the back roads to Coslada to the restaurant for a feast of mushrooms and ham, salad, "gulas" and shrimp, then a choice of arroz ocn bogavante or entrecot.
In some ways it's a little strange to spend so much time talking to people you hardly know and whose only point in common is motorcycles. Especially for me, since I know so little about motorcycles in general. On the other hand, it's amazing how nice bikers really are, how much they look for belonging and how eager they are to please and to be kind and helpful.

It was nice to touch base with El Chiri and Colgao, who are leading a weekend ride through the west of Spain up to the border with Portugal at the end of April. They're cool about me and my Bullet joining the ride.
In the end it was a full day, with lunch and the ride home, and well worth the 18 euros and tankful of gas.
Posted by Jónico at 11:11 AM No comments:

The very morning I got back from Chicago, despite the jet lag, I just had to go see my Balita Roja and try starting her up. I had had some trouble with the battery early in the year but I was more than satisfied with the quick, smooth start the other day.
I've been practicing my kick-start technique again. Kick-starting a Royal Enfield is not hard but it does have its tricky points. One is that you don't have to use a lot of muscle power to get it going. In fact, too much force won't work at all. The other trick is to find the "sweet spot" where the piston lignes up correctly inside the cylinder so as to be able to fire. I'm still working on this, and get a lot of "dud" starts and backfires.
It of course is harder to kick-start whenever there's an audience looking on. I think it even specifies this in the Owner's Manual.
Posted by Jónico at 5:24 PM No comments:

Catalan sculptor Jaume Plensa designed this 2-piece fountain. The water jets spew out of the faces in the summer. The faces were videos of thousands of Chicagoans.
Posted by Jónico at 5:24 PM No comments: 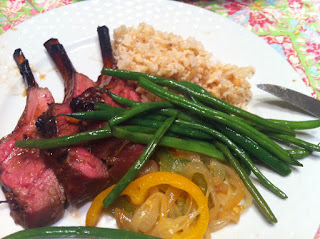 A good start to a week-long visit. My sister made us a LOVELY dinner of roast rack of lamb.
Posted by Jónico at 5:10 PM No comments:

The Route to Colmenar de Oreja

Time: 1 hour 30 minutes
Leave Madrid on the Valencia Highway (A-3), take exit 21 for Morata de Tajuña/Chinchón. It's a pleasant ride up the valley and then down to Morata. Cross through Morata and take the old road to Perales de Tajuña, turn right and take the new local highway M-315 to Valdelaguna (with its new bypass, go figure) and on to Colmenar de Oreja.
From Colmenar, after sipping on a glass of local red and eating some "patatas chulas", take the road towards Villarrubia de Santiago. I took the little side road to La Aldehuela, but the asphalt is in bad shape and it was more exhilerating taking the main road to Villarrubia. From Villarrubia you can go left toward Santa Cruz and Tarancón, on the N-400, or go the other way on the N-400 to Ocaña and see its Plaza Mayor.
Posted by Jónico at 11:33 AM No comments: 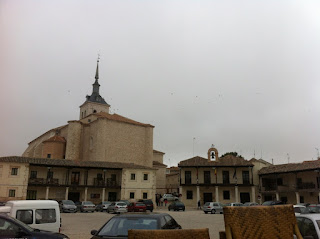 Cars and motorcycles stll park in the middle, like the good old days.
Posted by Jónico at 10:41 AM No comments: 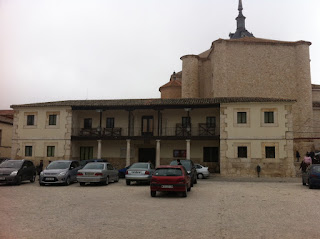 The old Plaza Mayor of Colmenar doubles as a bull ring.
Posted by Jónico at 10:40 AM No comments: 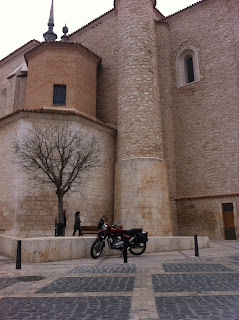 In front of the 13th-century Church of Santa María la Mayor. The church bells were ringing for the end of mass as I parked. The church still shows some of its origins as a fortified "castle-style" church. The white stone of its walls and towers is from a local quary, which also supplied the white stone for the Royal Palace and the Cibeles Fountain, both in Madrid.
Posted by Jónico at 10:33 AM No comments:

I've just gotten word from moby on the "official" dates for this year's Yearly Royal Enfield National Meeting. June 8-10, in Castellón de la Plana, on the coast of the bright blue Mediterranean Sea. My Balita Roja and I will certainly be attending. Javi's unlikely to join us, but there's hope of getting at least some of the gang from last year to go. The poor Sevillanos have a bit of a journey, as do the ones from the North Coast, but that's MORE than half the fun.
Will post more on it later as details unfold.
Posted by Jónico at 3:42 PM No comments: